The Story of Hachland Hill

Early Writers called this Northwest corner of Davidson County, “a land of mystery” where crystal springs flow and the land remains wild. Historically home to Native Americans (Cherokee and Chickasaw) –Abundant natural resources made it possible to live well off the land. Spring fed waters, wildlife and plant life: Sassafras, Berries, Walnuts, Ginseng, Maple trees for syrup, almost every species of tree, shrub, and wildflower grow, and birds, fish, deer, fox, and wild turkey thrive.
This remote mountain spur of the Cumberland Mountains is unique in every way. In the early 1700’s two French Brothers, by the name of Paradise, found their way here. The area became known as Paradise Hills. 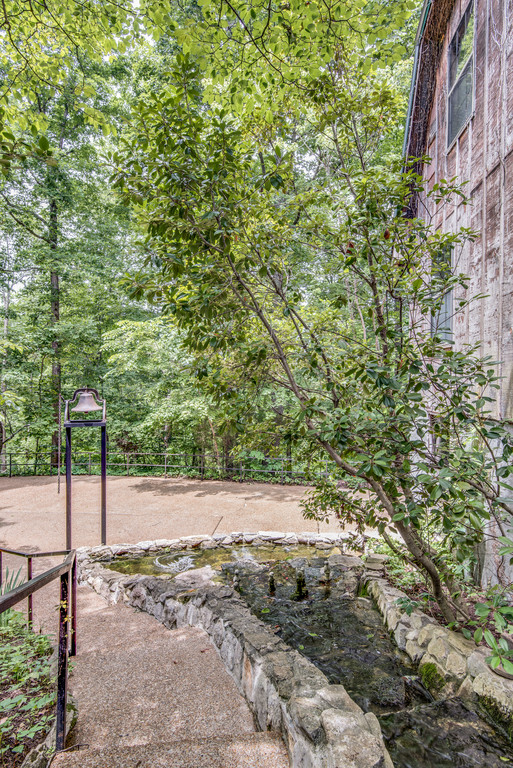 Soon thereafter came two kinds of people. First, the most brave and visionary settlers, most of whom were German and Italian. They moved on, away from the relative safety of Fort Nashboro, Northwest to Paradise Hills. They were proud, hardworking and private people. Some lost their lives to Native American Indians fiercely reluctant to be moved from their land. They built cabins, and learned quickly that the rocky soil was ideal for fruiting trees, and for tobacco. The area became known for its vineyards, orchards, berries, and for tobacco.

Secondly, renegades and others appreciating the remote location with hill and valley terrain that lent itself to concealment, found refuge in Paradise Hills. Legend has it that Jesse and Frank James hid out in these hills on occasion during their brief stint in Nashville around 1877. They worked and resided in nearby Whites Creek. Crystal spring water and a secluded landscape was a good scenario for Moonshiners too! Some say the faint taste of White Lightening lingers today in the water of Marrowbone Creek.
Sophie Mae and Arthur Rawlings purchased this property in 1922. They were appreciative of its beauty and opportunity, and determined to preserve it. Arthur negotiated an agreement with the three active still operators that he found on his property. They would have one full year to relocate. He thought best not to press them. In the 1940’s, the Rawlings and some other families in the area donated part of the land to the state of Tennessee for a Federal Work Project to build the most beautiful small, spring fed lake in Tennessee, Marrowbone Lake.

Phila Rawlings Hach inherited this parcel of property where she had grown up wandering the woods, splashing in the creek beds of limestone bedrock thousands of years old, and collecting arrowheads. Phila had made quite a mark on the world of hospitality. She created the first airline catering manual for American Airlines. She was the first woman on television in the South with her show on WSM, “Kitchen Kollege”. She authored 17 cookbooks, and she and her husband Adolf operated Hachland Hill Dining Inn in Clarksville, TN for 40 years.
In the 1980’s Phila and her son, Joe, returned to the beloved property here in Joelton. They envisioned and built a corporate retreat, Hachland Hill Vineyard, with reclaimed logs and stone from cabins and a school house once inhabited by the original settlers in the area. The retreat offered Nashville business executives a place to escape the hustle and bustle, a place to relax and open their minds to opportunities and strategies that were not quite so apparent in the confines of the city.

Fast forward 35 years, Phila’s grandson, Carter Hach, with the same passion and love for the land, the wildlife, and the heritage; continues the story with respectful allegiance to the past, and a vision for the future.

Hachland Hill welcomes groups and individuals alike to step away, step back, and be nourished by the natural landscape and authentic southern hospitality offered here.